How can you use language versions to increase the visibility of an app in the stores? This and more tips about ASO can be found here. 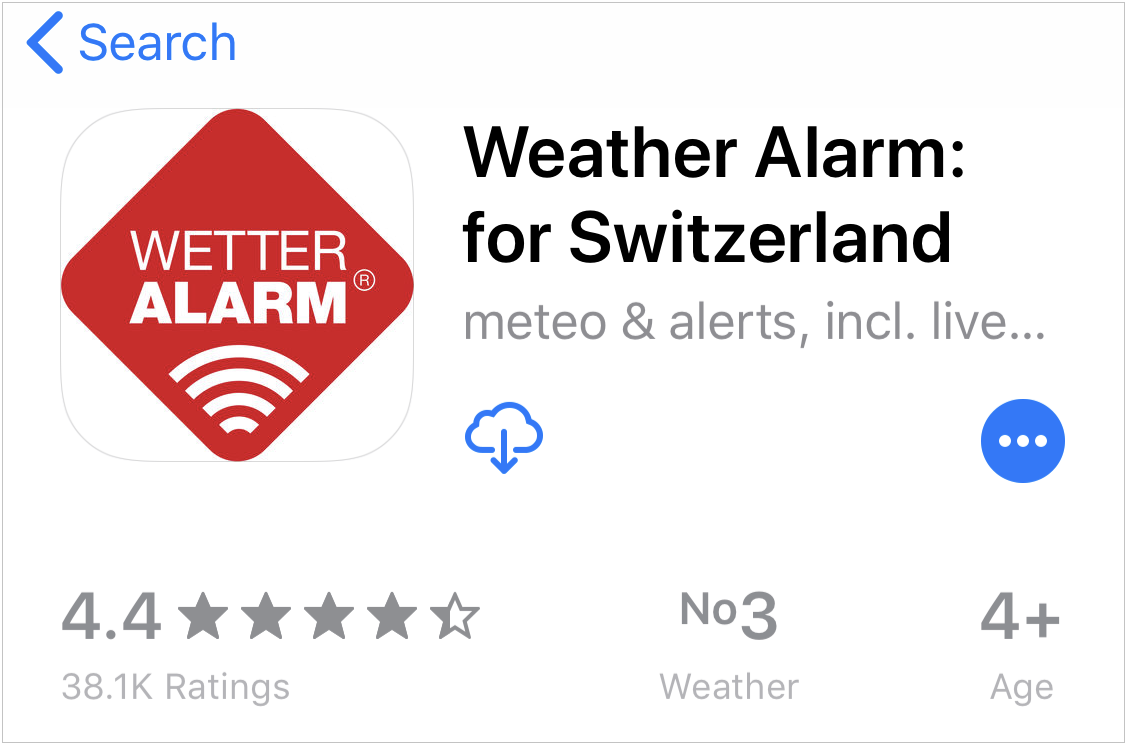 Multilingual countries like Switzerland have special challenges for ASO specialists, because simple translation of keywords is not always productive due to regional language habits.

For example it is common among German-speaking Swiss to use French words such as "merci" in their everyday language. Now "merci", like its German counterpart «danke», is usually not a term suitable as a keyword, as it does not contribute to specifying the problem to be solved by a user.

But there are other examples: for car-related apps, the term "used car" might be relevant, and a keyword analysis for the German market will confirm that assumption. German-speaking Swiss, however, rarely use "used cars" in their everyday language. They prefer the French term "Occasion".

Half as bad, you might think. Because anyone who markets their iOS app in Switzerland has already created a French translation of their product page - the product detail page of the app - and placed "Occasion" in their keyword field. Users looking for "Occasion" in the Swiss App Store will be able to see the app in any case.

This approach seems logical - but would still be a fatal error. It's true that users who search with just one keyword will find an app regardless of the language version of that keyword. The only requirement is that the respective language in the destination country of Apple's search algorithm is indexed and searched accordingly. In the Swiss App Store this applies to four languages: German, French, Italian and British English.

So why is the use of a French-based keyword only in the French translation a mistake? The reason for this are the so-called "long-tail keywords". As such, one calls queries that consist of several individual keywords. In the context of a car app, these could be, for example, "Occasion kaufen", "günstige Occasion" or "Occasion Händler".

At this point it becomes now a bit complicated. Because in order to catapult an app to the top of search results for a long-tail keyword, all of the individual terms contained in that long-tail keyword must be part of the product page. The keyword field would have to contain "Occasion" and "kaufen" so that the app will be listed as a search result for "Occasion kaufen".

Unfortunately, Apple's algorithm does not support language blending and only scans the various translations of the product page independently. So if "Occasion" is listed in the French and "kaufen" in the German keyword field, the algorithm does not recognize the app as a relevant search result for "Occasion kaufen". All keywords to be combined must therefore be used in the same language version - in this case in the German translation. Otherwise, as an App Promoter, you will miss the visibility generated by Long-Tail keywords.

There is another way to use language versions to increase visibility. Apple's App Store usually indexes at least one language that is not an official language. In most European countries, including Switzerland, this is British English.

And an English product page makes perfect sense for a Swiss app: for 5% of the Swiss population English is the common language and even 20% speak English in their job mainly [2]. With an English translation you can pick up a new group of potential users.

But even if English-speaking users do not represent a relevant target group, an English product page can make sense if you follow the clever strategy of the German ASO expert Moritz Daan [3]: Instead of filling the keyword field with English keywords, you use keywords which have not found a place in the German (or French / Italian) version due to the restriction of 100 characters. The App Store algorithm recognizes these keywords even if their language does not match the language of the Product Page.

In this procedure, it should be noted that all elements of the product page visible to the user, such as the app description or the text components in screenshots  must be translated according to the language version. If this condition is met, the strategy offers good potential to bring the app into the search results for more keywords and thus to increase their visibility massively.

The right Strategy for Google Play

Android apps have different rules. The Google Play Store algorithm basically indexes all available language versions, regardless of the country. Therefore, it makes sense to supplement the appropriate translation  for any language spoken by the relevant audiences.

Since there is no user-invisible keyword field, Android keywords need to be implemented in the app description. This means that it is not possible to use keywords of another language.

However, in order to achieve the best rankings in search results for your own app, one should not rely on the  the algorithms ability to combine. The chance for good results is much higher if you include the most important long-tail keywords as "Exact Match", where all the individual components follow each other directly in the correct order. If an app is to be listed for "Occasion kaufen", these two terms should appear in exactly that sequence in the text.

Would you like more exciting and in-depth information, tips and tricks on App Store Optimization? Then take a look at my new book, "App Store Optimization - A Step-by-Step Guide to Boosting Your App's Organic Downloads." On 307 pages I explain everything you need to know about ASO, from the basics of keyword research to the pro screenshot optimization strategies. All concepts are explained in a clear and descriptive way using examples from the app stores. You can find more information about the book as well as a free chapter on the test reading on my website. By the way: With the discount code "appculture" you save 25% on the purchase of the e-book.

[3] Moritz Daan, “Increasing the Number of Keywords in App Store Optimization in Localization”, ASO Stack, June 2016, https://asostack.com/increasing-the-number-of-keywords-in-app-store-optimization-by-localization-daa02ffd8946, called in May 2019